I have a hard time getting rid of pants. I mean, it's easy to donate pairs that don't fit or that I never really liked in the first place, but the ones that I love and wear until they're falling apart are the ones I tend to hang on to. Once they've reached that point - where they're unfit to pass on to somebody else - it seems a little sad to just throw them out. 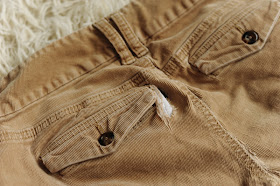 My pants usually wear out at the knees first, but these guys had a couple tears around the pockets and a huge rip up the back of the leg. Luckily, baby legs are considerably shorter than full grown ones (even short legs like mine), so I was able to turn my much loved corduroys into a cute pair of pants for my little guy! 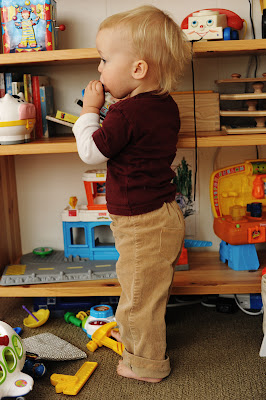 Since I was making these for Abe, I decided to throw caution to the wind and use contrasting orange thread, instead of a boring beige that would blend in (and hide my mistakes). Luckily, there weren't too many mistakes, and the orange thread looks adorable on the back pockets. I love a little baby butt with pockets! 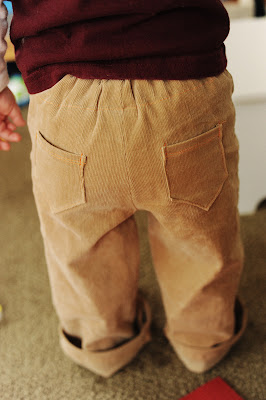 I basically followed this tutorial (from MADE) for sewing baby pants, which even shows you how to create your own pattern from an existing pair of pants - which is what I did. 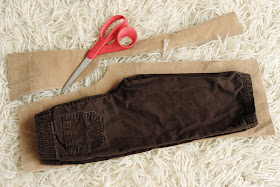 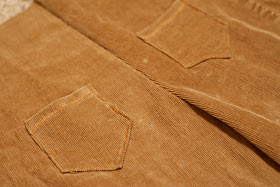 I also wanted to add pockets, so I cut two small pieces for pockets and hemmed the top. Once I had the back seam finished, I folded the edges of the pocket under about 1/4 inch, pinned, and sewed them directly to the back of the pants. I eyeballed the placement so they're not perfect, but who's going to notice on a toddler who rarely stops moving. 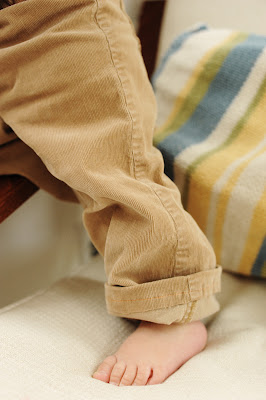 Keeping the original outer leg seam made my job that much easier, and makes these pants look almost professional. Notice the raw edge on my hem. If it's not going to show, or fray too much, I usually just leave my edges raw. I'm sure he'll outgrow these before my laziness becomes issue.
Unknown at 3:14 PM
Share