Ever since I spotted this wreath on Pinterest I've been dying to make one for our house. Only problem is, it's really hard to find orange feathers! I've dyed feathers before so I might attempt it next year, but for now I decided to make a less colorful one for Christmas. I loved this white one from West Elm, but at just a little over 15 inches wide it looked super tiny in real life, so I opted for a bigger, fluffier version. (Just ignore the fact that our front door is also white. I plan to paint it someday...) 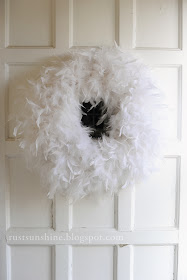 There are a ton of wreath making tutorials on the web, so feel free to follow a different one if you want to use a pre-made wreath form. When I went to Joann, they only had the little ones in stock, and since I didn't want to search all over town or spend any more money than necessary, I decided to make one out of cardboard instead. 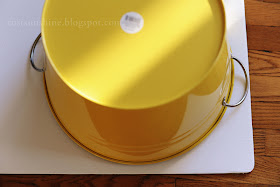 1. Trace a large circle onto 2 pieces of cardboard. (I used a large beverage bucket, with a 16 inch diameter, as my guide.) 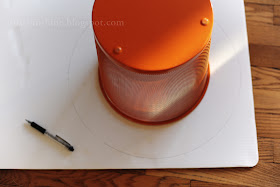 2. Trace a smaller circle inside the large one. (This time I used a trash can that was about 8 inches smaller than the beverage bucket, so the wreath was about 4 inches wide all the way around.) 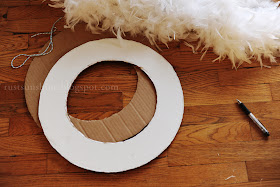 3. Using scissors or a box cutter, follow your guidelines to cut out 2 cardboard "donuts." 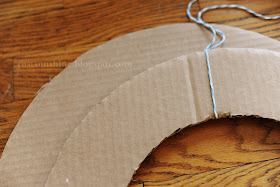 4. Securely tie a string (or wire) around one "donut" for hanging your wreath when it's done. 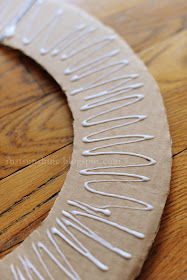 5. Glue the two "donuts" together. For added stability, I made sure one "donut" had the cardboard channels going vertically, and the other running horizontally (see the photo with the string above). 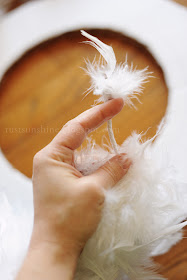 6. After the two pieces are glued together, hot glue one end of a feather boa to the back of your cardboard wreath.

7. Wrap the boa around the wreath, passing it through the middle and around the outer edge until you get to the other end of your boa. (One boa should cover roughly 1/2  of the wreath.) Push the boa loops closer together or spread them apart a bit as needed, and hot glue the end in place. Repeat with the second boa. 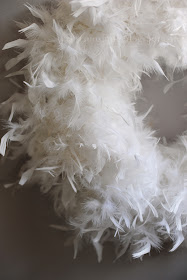 8. Tie a loop with the string you attached in step 4, or run a ribbon behind the string, and hang it up!
Unknown at 8:00 AM
Share